How we organized our presence at CodeMash 2017

I've recently arrived back home from Codemash and I wanted to write up my reflection on the preparation for the conference and what happened there. It was my first time attending this conference — and what an amazing conference it was! I was kind of nervous to be around so many people and didn't really know what to expect, but everything at the event is so well organized that it is difficult to believe that you are at a conference with 2000 attendees and 400 kids.

Codemash was an opportunity to meet our customers, introduce ourselves to potential customers, and to sell our products. It was also an opportunity to meet other companies that sponsor the event and share in this huge event. In this post I would like to share our experience from before and after Codemash, and how we will use this experience to sponsor other conferences.

Why we chose to have a booth at Codemash

Along with sponsoring, several team members submitted talks. Five team members were accepted to speak at Codemash; additionally, we received a sponsor talk slot. Having both a sponsorship and speakers was helpful for getting lodging and conference tickets, especially since Codemash tends to sell out all the venues rather quickly. The fact of having a physical presence at Codemash and having members of our team as speakers was really interesting for our company. We had several attendees that came after the talks to ask questions and inquire about our services.

Attending a conference as a sponsor doesn't necessarily mean that you have to follow suit and do what everyone else is doing. As soon as we got the green light to have a booth at CodeMash, we started to research how we could present the company.

Looking online, looking at examples of booths at the conference, I felt disappointed. I had a clear view of what we wanted to achieve: I wanted to create an environment to foster our culture and reflect the best parts of DNSimple. A banner, a table, some pencils, and stickers at the corner of a long table was not good enough in my eyes. After asking permission from the organizers of the conference, we decided to buy real furniture and to set one side as a mock living room, and the other side as a place to show our customers (and potential customers) what we can do to help them with their domains.

The "booth" is almost completely set up!

We wanted to reflect how we work at home since we are a fully remote team. And being different worked… the reaction to our booth was even better than we had hoped. The booth deserves to have a blog post itself; it was not easy to get the furniture delivered to Sandusky. But thanks to Aaron and Antoine, who picked up the furniture directly in Chicago and drove to Sandusky with their cars full, we were able to get the booth to look like we wanted.

Nothing ever goes 100% as planned, as we were putting together the furniture we realized that we didn't order the correct tables for the standing section of the booth. Luckily, the resort was kind enough to let us use some of their tables (thank you Ole for the good idea, and thank you to the Kahalari for letting us use the tables).

My take away from this first experience is not to settle for being "normal" if you feel that it is not what you really want to do. You are there to represent your company and to make the best impression on people. Our goal for CodeMash was to have people look at us, stop at the booth, and talk to us. And I believe that we achieved that.

Look and stop at a booth that looks different

The IKEA furniture helped achieve the feeling we wanted: not corporate, instead, passionate people that solve problems right from their homes… an invitation to sit down and hack with us. We did not have a huge banner, nor a huge logo, instead we decided to incorporate pillows with our mascot or logo.

On the coffee table, we had a floor sticker with our logo as well. We included artwork in shelves that suggested who we are and what we do. We had a lot of comments about the booth; the pillows (made on Etsy by small vendors), for instance, were commented on by several companies who thought it was a good idea.

At the end of the conference, one of the attendees even asked us for one of the pieces of custom art, and she even got it signed by Sebastian, our lovely designer!

Additionally, we had a chalkboard and white board where we wrote messages and encouraged others to write as well… it was fun! Fun for us, the team, and I hope fun for the attendees as well. Sadly, though I thought attendees would be inclined to write on the board, but that didn't really work out. Instead, we used the board to explain what DNSimple does and the features that we offer.

We also had several books about programming (that were generously donated by Pragmatic Programmers) to finish the "homey touch". The books were amazing to have and we gave the away for free to other programmers at the end of the conference.

The DNSofa is an invitation to sit down and chat with us, maybe even hack with us. The stand up tables, with our computers, was a way to invite people to talk to us about their domains. The chalkboard was there to help create conversation. We also planned for a monitor on the background to display of the landing page of our site.

This all added up to a successful and attractive environment where people came to talk to us and ask questions about their domain management. Equally as good, we had a lot of people who weren't customers asking for tips and advice. We referred a lot of them to howdns.works to explain what DNS is, and we also used a coloring book to present our mascot.

We even adopted one of the attendees in our booth. "Batman", aka "Meg", stayed with us a couple of days during the event. She was fun and very helpful at the booth. Thanks, Meg!

Choosing the right swag for DNSimple

There are some swag items that we know work given their success at previous conferences. Sebastian designed a series of stickers and magnets that are very popular. We decided to go safe with what works: t-shirts, magnets, stickers, and (of course) candy. This year we also added patches, and I hope they become popular because they look awesome!

Who else has a squishy 💩sofa pillow? Only at the @dnsimple boot at @codemash pic.twitter.com/OUNwaIff6I

We are not a billion dollar company, so our budget is limited for swag. We decided to give away t-shirts primarily to our existing customers, or people that really enjoy what we do. We did also reach out to customers that were there and the sponsors that are using our services. Code and Coffee and Detroit Labs: you are the best!

We met the folks from United Shore (Matt, Cameron), some of the team members of Stout (Eric and Bob), fabulous Nancy from ManifestSolutions, Elyse and Jacky from Detroit labs, Jacob from CareworksTech, and Allison from Blue Ocean Coding (their story is incredible and I hope to get the chance to meet the founder of the company!)

In addition to the swag we know works, we also wanted to introduce a bit of fun. Enter the emoji ball! CodeMash takes place at a hotel with an attached waterpark, so it fit perfectly with the event. If you got one of those, you noticed that there is no branding on it. We struggled with how much branding is too much branding.

The company culture is centered heavily on not intruding on people's attention, but we still are trying to run a profitable business and do some publicity. This means that we worry a lot about whether we are too aggressive, whether we are respecting our customers and potential customers. Do unto others as you would have them do unto you is what we believe. This leads to some interesting challenges when planning how to market at a conference like CodeMash.

So more by ethics, rather than by strategy, we did some guerilla marketing with the emoji ball and the candies that we gave away. The KidzMash kids loved the emoji balls and over 220 were given away. I am just a little bit sad that we didn't see them all at once in the pool of the resort. Maybe next year!

A little something sweet is always a nice touch, but the candy we chose meant something to the team. This year we gave away Haribo gold bear candies. In 2015, the DNSimple team went to Uzès in France and visited the Haribo factory, so we feel close to the Haribo teddy bear and wanted to share. We had lots of people stopping by to grab candies, it also helped spark conversations with lots of attentees who had never heard of us.

CodeMash is special since they have KidzMash in parallel, where there are kids of all ages.

Sebastian designed a coloring book with reference to howdns.works, with our beloved mascots, especially for the kids at KidzMash. A coloring book called for Crayola crayons too, so we included those with each coloring book. We also made something special for the kids: tattoos with our mascots, Trusty and Tiny P, on them. OK, in truth that was also for the adults.

We set up a clue at the booth for the scavenger hunt and we donated our funny emoji pillows to the KidzMash raffle. I hope the kids had as much fun as we had. It's a special touch to be able to talk to the children and to support KidzMash. The coloring books were a huge success for kids, but also for adults.

Hats off to Gabrielle and the rest of the team for organizing KidzMash.

So did it work?

The initial goal was to get developers for our domain management Platform to develop add-ons; to be perfectly frank, I don't think we succeeded with this as much as we had hoped.

On the other hand, I think we did well with overall branding and awareness. Our booth caught the attention of people and I hope that now the attendees of CodeMash know who we are. Our team also grew stronger with the experience of being all together at a conference and talking with customers and potential customers about our services. We had so many nice comments from existing customers—that was amazing.

What also struck me was the attitude and communication between sponsors. We were able to talk business, exchange tips on domain management, and talk about our different marketing strategies.

Finally, thank you to everyone who helped run CodeMash and KidzMash, and thank you to the Kalahari resort staff (Jacky, Tanya, Brian, Chef Samuel and so many more). I am definitely looking forward to CodeMash 2018! 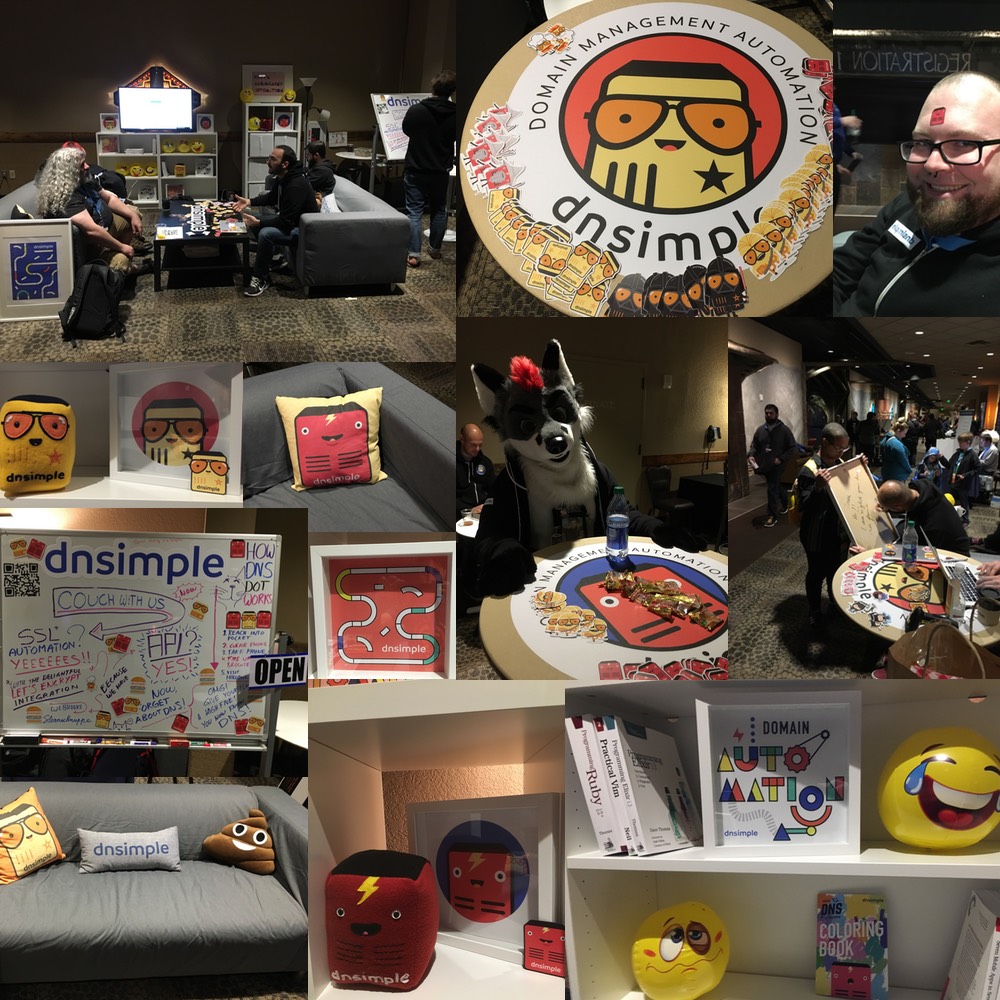