Ohai Everyone! (big blob of json)

I just wanted to take a big huge breath of dry Las Vegas air and reflect on how amazing ChefConf 2017 was and all the awesome stuff I pulled from it. Maybe share some of my learning and experience for all of you! If you didn't get to go then I recommend you check out their youtube channel where they will be uploading videos of the amazing keynotes and sessions soon!

After a full day of flying and airports I showed up at the hotel Sunday night to find the lobby bustling with activity. Community events like these have everyone already starting the hallway tracks early, catching up and sharing ideas. A few people had already begun hacking on presentation ideas and patches. It's hard to beat the energy that we all manage to pull together but the night was short even as so many plans for the week were made.

The next morning, bright and early, I attended the community summit, which is one of my favorite events of the year. I love the open spaces style as it gives everyone a great chance to talk. specially since I can't get a talk accepted at conferences outside of mob rule usually ;p.

After introductions we did our normal rush of ideas and voting and put together a set of sessions. I started with taking notes for the test-kitchen multi space. There is a lot of work that needs to be done for cluster-based and multi-node testing with kitchen, but there is a chef rfc open for it! We also sat and discussed a lot of kitchen plugins that can make everything much quicker and more efficient. We also briefly talked about how they are working to help make kitchen more of a general tool instead of being directly tied to Chef since many other communities can be using this tool.

After a break for lunch we had a circle for my suggestion, "Policyfiles and how they are going to solve my depsolver issues". We got to talk a lot not just about how Policyfiles help with dependency but also deployment, change management, and all sorts of problems people had. A lot of really experienced people shared and even Michael Hedgpeth showed up. He's been writing a lot about Policyfiles and trying to grow the community around them in their #policyfile channel in the Chef Community Slack. It was an amazing circle and everyone had something to share.

After the policyfiles circle I pulled out of the summit sadly. Anthony has brainstormed up a superb idea for a demo of our cookbook to give at the booth. Aaron had started it while I was in the Policyfiles chat so it was my turn to tag in while he attended the summit. I took the next two sessions hacking together our cookbook, the httpd cookbook, and some shell scripts around test-kitchen's Digital Ocean plugin to make an awesome little demo of how rapidly you can provision a web server and have it instantly serving from your domain all in one fell swoop. I plan to make a webcast of it soon for everyone so watch our chef page for more details.

I'm not really a booth or marketing focused kind of guy but it really was the best to have so many people at ChefConf come check us out and talk about DNSimple and their companies. It's not just lip service we have to offer either, but amazing shirts (we ran out of) and a service that really fills the needs of the Chef community. It's also important for us to hear back from all our customers as well! We want to know what their needs and pains are to see if we are a good fix to help them, or if we need to extend our service further. 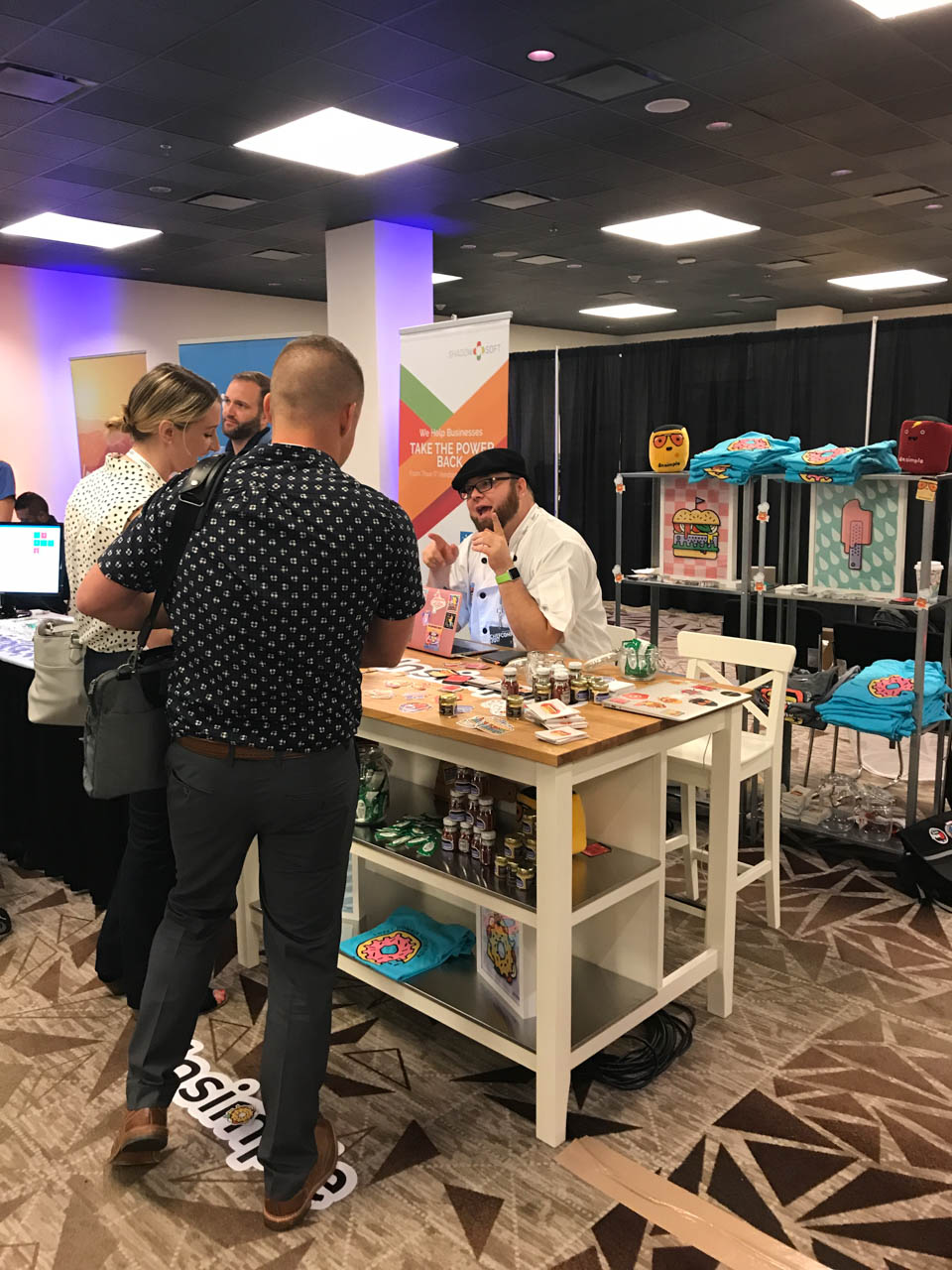 At the end of Monday a great ChefConf tradition came to pass once again: Karaoke! Like last year, a bunch of attendees gathered at the Highball and we sang our hearts out all night long. Well I sang out people's ears and eyes. I keep telling people not to let me get a chance because it's all Bloodhound Gang, Beastie Boys, and songs far out of my range.

Tuesday: At the Helm with the Community

Tuesday morning was packed with keynotes and to great joy we even had part of Adam Jacob's keynote. I love his talks more than so many other things. They had some amazing demos to share with us as well this morning around Automate. The whole feel and choice of topics around the keynotes really showed through how much Chef is now focusing not just on Chef, but moreso on compliance. Compliance was the drum to beat on the whole conference.

I spent most of my day talking with the attendees who stopped by our booth and showing off the demo we wrote the day before over and over. All in all everyone was impressed and that made me feel great. As always we had a lot of fun with our booth and swag. Sebastian developed up some food themed stickers and shirts that were flying off the shelves about as fast as we could hand them out.

I did get to one session, which was STIG Automation with InSpec and Chef by John Ray from ShadowSoft, who was one of our booth neighbors. It was a great talk and I look forward to getting the time to implement it soon myself. I think security is immensely undervalued because it's easy to look at the problems you have to work on that you already know about and say "This is more than enough work, I just need to focus on this". However all around your infrastructure and applications are the unknown unknowns that you aren't even taking the time to prioritize. So much of security is about figuring out what issues there are and triaging so all the high value and high risk can be dealt with, and the low value low risk can at least be understood and cataloged. As we've said before, we take security very serious here at DNSimple. The ability to codify your security standards and check against them regularly is something I really value and InSpec is really pushing this forward.

Chef is going all in on security and compliance and I think you all should too. It's a huge risk factor out there. Other than InSpec https://dev-sec.io was called out as a great resource to look for helping implement compliance at your company. Compliance doesn't have to be a big scary word that means filling out spreadsheets and PDFs. The meaning behind compliance is figuring out what applies to you, auditing if agreed upon practices are followed, cataloging your security status and then verifying things stay in good order. If that sounded familiar it's because it's the same pattern we apply all over our businesses from testing to SOPs, to business continuity.

Tuesday evening was Game Night, one of my favorite times to socialize with the community and of course play all the games. This year we also had an Artemus room as well as the main room and the turn out for people to play was easily five times the expected volumes. We ran out of workstations fast and had to rush to try to get so many people set up. We expected maybe two bridges worth of people and enough people to cover four, possibly five ships, for people who wanted to jump in. Even with all the people setting up and playing I hardly managed to peel myself away from the helm for more than ten minutes before my phone would ring and I would be called back. It was amazing to pilot the USS Bary Christ, USS Gizmodo, USS Death from the Side, and more. One twist that Admiral JDizzle and Rob brought into it was after sessions we would treat them like an incident and have reviews over the what went wrong, what went right, and also what we should do going forward to prevent further issues. Gasp! We worked while playing our games!

Wednesday was not to be delayed no matter how late I was up driving starships. Wednesday brought more keynotes and the siren song of Adam's main keynote. I ended taking a ton of notes about Mark Burgess, promise theory, and how to apply this to systems thinking as well as company structure! I have a lot of reading to do and it's all Adam Jacob's fault.

Afterwards you may not have noticed me at the booth as I slipped away to see George Marshall talk about Python Applications in Habitat which is something I am super interested in for many personal and side projects (woo go pythonistas!) and then reported directly to the front row of Michael Hedgpeth's Policyfiles talk. It was a packed standing room only talk with two monitors and he gave an amazing presentation. I really feel policyfiles are an underestimated tool and you can expect plenty of more blogposts about them from me in the future. After this talk I snuck into Tim Smith's Chef Testing talk. No matter how basic his talks are he is an amazing speaker and I always have takeaways from them. I always recommend going to anywhere he is talking and listen.

I snuck in plenty of hallway track time this day and then scurried to closing ceremonies afterwards, enjoying ice cream sandwiches while we applauded some of the communities most awesome peoples. After this I wandered Austin with new and old friends, acquiring donuts and delivering coffee before we headed over to the closing show. I think the new venue was delightful in every way. The open yard filled with BBQ and drinks, chill back room, and of course a stage filled with the best bands Chef could cultivate like Recipe for Disaster!

Even through we were all so tired and our feet hurt Thursday morning had a place to put our bags and hack away at different projects. My hackday project sadly got muddled away in testing framework issues but I was able to sit down and help Anthony work on hacking SSL Certificate download and install functionality into our cookbook!! We have that to look forward soon!

ChefConf as a whole

So that was my ChefConf, well most of it. It was such a densely packed week that I couldn't possibly tell you every last story from it but if you see me at other conferences I'd love to tell them and also maybe start some stories with all of you!

Also I want to take this bottom space to make all the callouts to JJ Asghar and Shaun Mouton for not only helping me out but also helping out DNSimple as a whole.