I attended my first UNconf (JSUnconf) this year in Hamburg. I had no clue what to expect at an unconf. I was curious where the concept came from and how it would be applied to a tech conference, so of course I researched a bit using Google. I found the following wikipedia definition:

un·con·fer·ence ˈənkänf(ə)rəns/ noun a loosely structured conference emphasizing the informal exchange of information and ideas between participants, rather than following a conventionally structured program of events. "at this unconference, attendees created sessions on the spot, making for an energizing and freewheeling exchange"

Now how did JSUnconf unfold?

The conference took place in a school for media and communication. The choice of venue gave a very laid back ambiance: I felt I was back at the university. We had a courtyard so we didn't have to stay indoors for the entire conference, which was really nice. Sometimes it is overwhelming to stay in a confined place the entire day. So the fact to be on a campus helped give the conference a less formal feeling.

The process for an unconference is really similar to a normal conference but there are some small details that made it different:

We start with registration booth, but something caught my attention right away my name tag: It said my name, my company, and something that I didn't expect "potential speaker". I had never considered myself as a potential speaker before and made me realize that I may have knowledge that other would be interested in. That was my first "unconf shock".

Organization of the day

It's not because it is an unconference that the event is chaos. On the contrary, JSUnconf was well organized. Tina opened the event and explained how the Unconf will take place. At a normal conference you have scheduled speakers, and if the conference has multiple tracks you choose what is the most interesting for you. Unconf is similar, but the speakers are only chosen on the day of the conference.

People came to the stage and each had a few minutes to present what they wanted to talk about. Once everyone proposed their talks, everyone at the event was given the opportunity to vote with heart or star stickers. Ole remind me that it is called "dot voting". Each of us got to vote for the talks that interested them the most. I really like the fact that the speakers had the chance to present what they wanted to speak about and not that it would be set to a conference schedule without the input of the attendees. 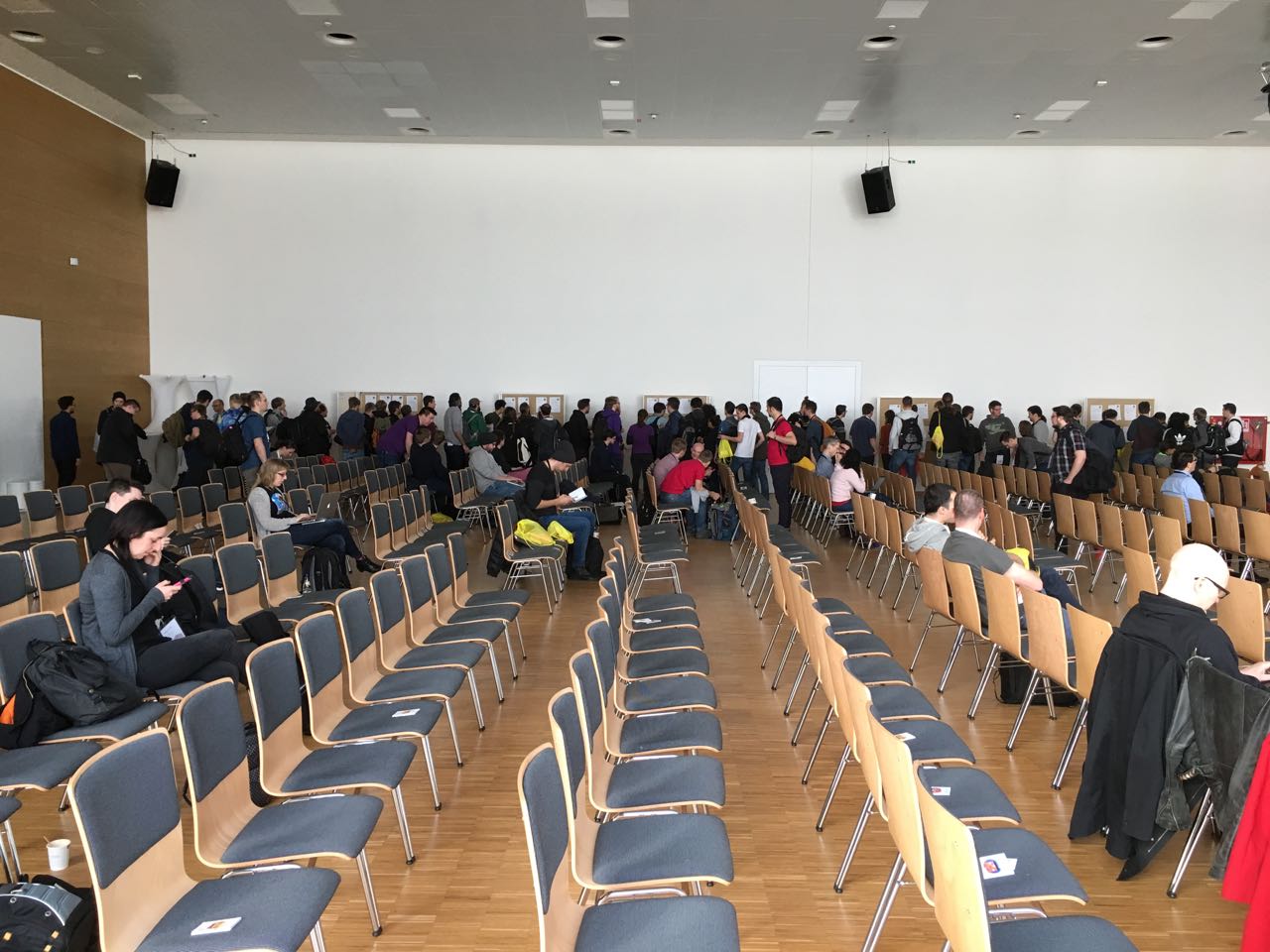 I just have a note regarding this process: maybe it would be better to have the topics few days before the conference and have a video presentation of the potential speaker. The process went really fast and I had to take note to remember the different topic and match them with who the speaker was. None of them came empty handed; they all prepared something and I felt it was not fair for the ones not picked by the attendees on Saturday or on Sunday. But life is not fair and I guess it's part of the game.

As I said before, the fact that we were on a school campus gave an interesting feel at the event. A lot of people stayed around the "Social hub of the conference", the coffee station, where you could find a lot of tables, chairs and even a pinball machine.

We enjoyed the outside area where a lot of us had their lunch. Tina, one of the organizers of JSUnconf, ordered a beautiful, sunny Saturday and Sunday, so it was nice and to have people gathering outside.

There were three main areas: an auditorium, a smaller room on the first floor of the building, and another room (Hallway) in the building next to the main building where the Unconf was taking place.

Each room had a very different feeling. The auditorium was more formal, the classroom at the first floor..well felt as a classroom, and the downstairs hall was very bright and open, so people could come and go.

The behavior of the attendees really shifted (I think) depending on where they were attending talks.

In the classroom it was less formal and often during the talk I went to it was not a talk but more exchange of opinions with an MC leading the discussion.

In the hallway room I thought the ambiance was completely different: it was more open and therefore discussions were as if you had people over to have a casual conversation.

How do attendees behave

It was a lot of spontaneity. I felt that as an attendee in an Unconf people were more active and not so shy or intimidated to talk with each other. I felt like it was a very dynamic and energetic conference because the attendees do have a more active role in the conference.

The sessions I went to were very different from each other. I liked a lot the presentation about not being afraid of speaking in public. It included the input of several people in the room sharing moments of their speaking experience. I felt people were very open to share experiences, painful or otherwise.

And What About DNSimple?

We came to JSUnconf as a sponsor and we had to be creative since an unconf is not like your typical conference. We wanted to respect the unconf nature of the event. We decided to ask a local coffee owner Deniz Kumker with "Die Coffee Caterer" to come and serve the attendees. 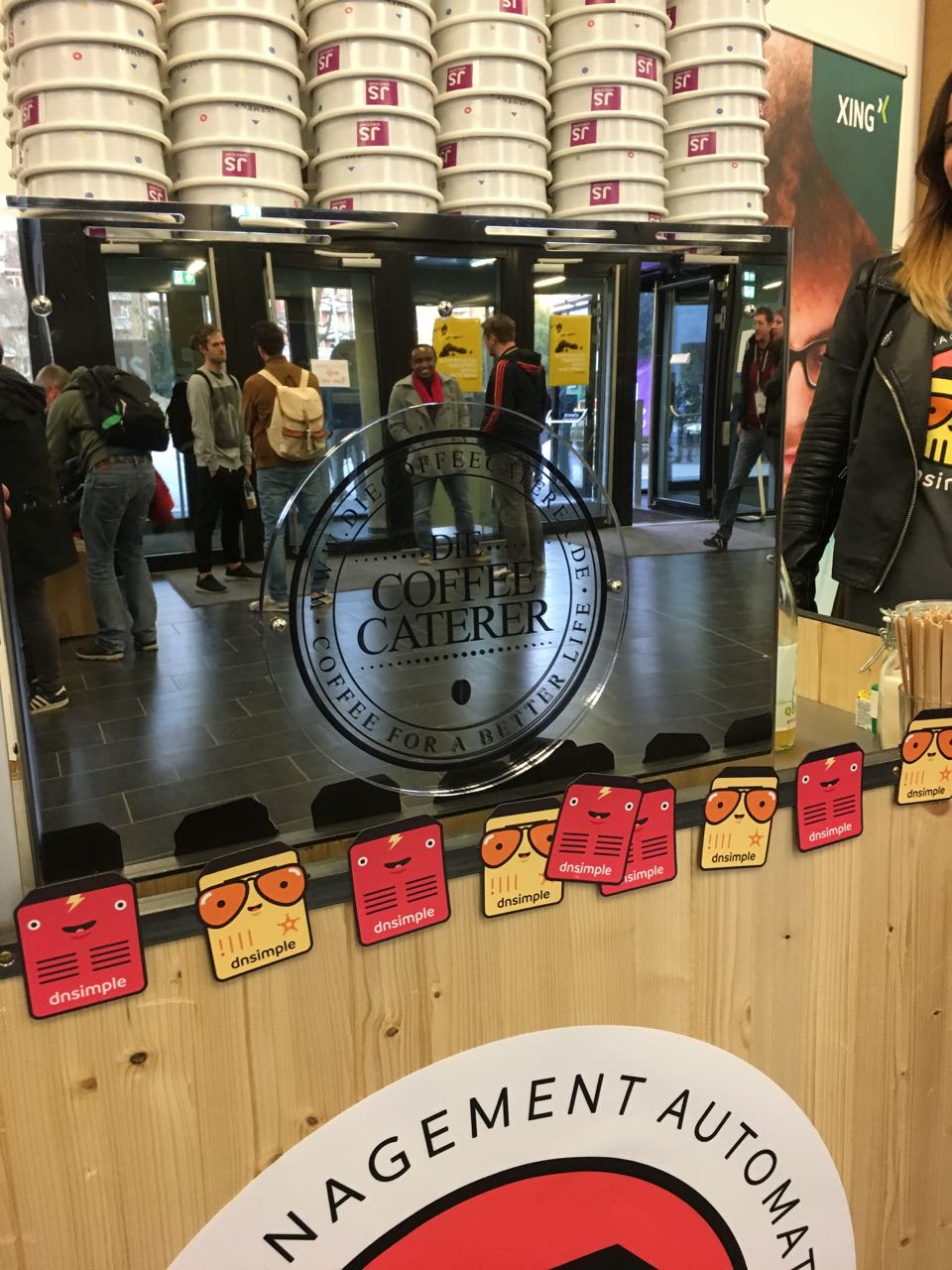 We wanted to fit in the feeling of the unconf, as if we were in a real coffee shop. We even had cups specially made for JSUnconf, and plenty of stickers to share. 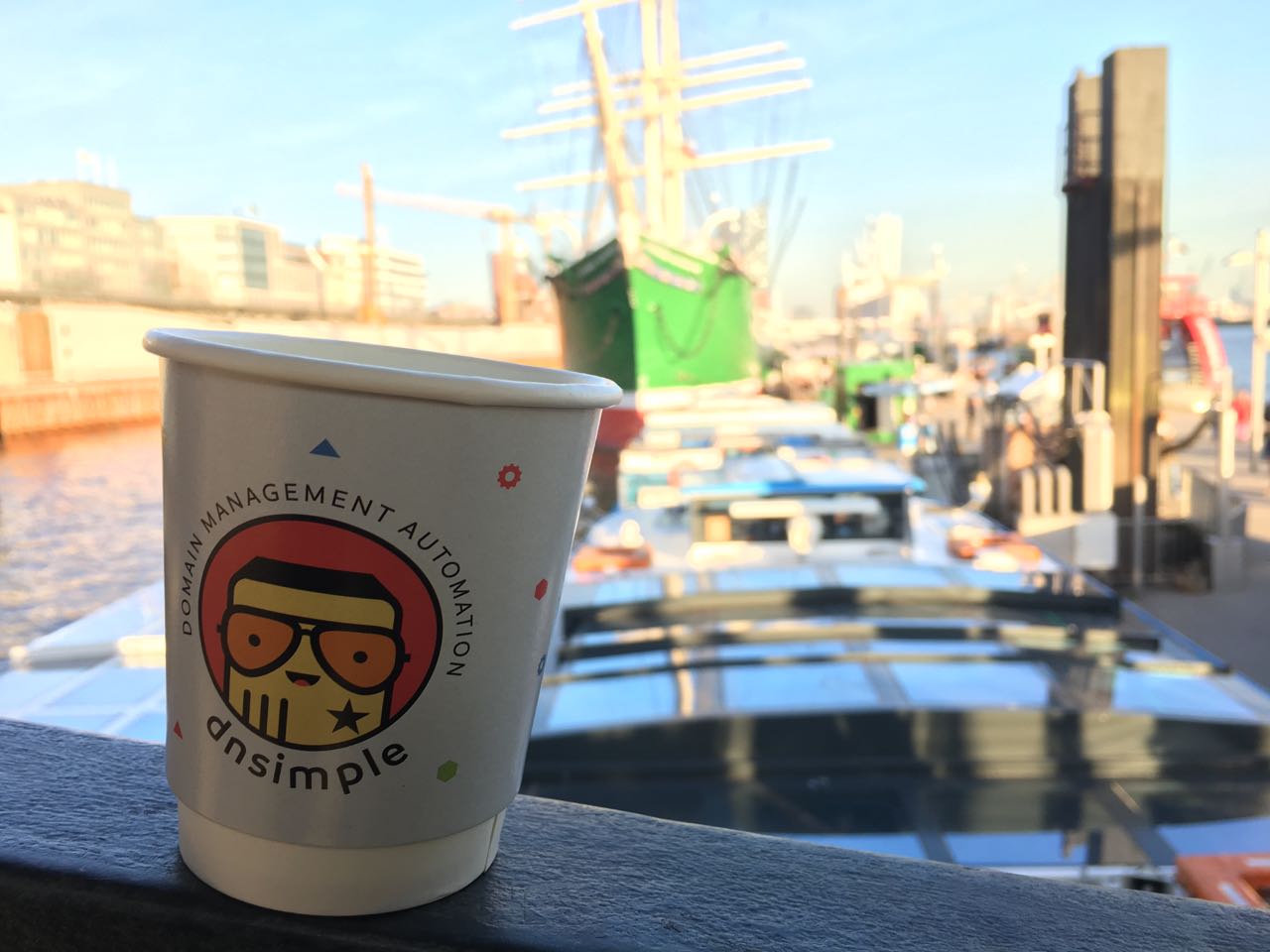 We also decided to have a landing page for the attendees of JSUnconf with a special promotion offer.

As a newbie, I really enjoyed my time at JSUnconf! I liked the open spaces and the fact that people were not afraid to talk. It was also really nice that the speakers were interacting so well with the audience. I am definitely looking forward to attending next year, and maybe I'll even give a talk!